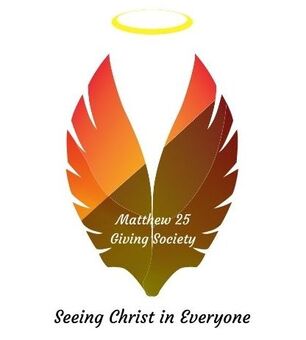 The Matthew 25 Giving Society is comprised of loyal individuals, civic groups and businesses that have taken a leadership role in our community through their multi-year financial commitment to support the work of Catholic Charities.

The goal of the Matthew 25 Giving Society is to ensure that Catholic Charities has the resources and leadership in place to secure a future of sustained service to those in most need in our community.

Each year we celebrate individuals and organizations who gave of their time and talent, and share a common belief in the responsibility to be of service to their neighbor. This collaboration furthers Catholic Charities’ mission to create hope for those in need by promoting self-sufficiency, strengthening families, fighting poverty and building community.

Catholic Charities is grateful and blessed by their kind and generous commitment to helping those in need.
​

Take Our Post-Event Survey
We are filled with joy and gratitude as a member couple has offered to double the Society's contributions received between July 15 and October 31, 2020 up to $50,000.00. One dollar becomes two dollars, and collectively, we pray that $50K becomes $100K.

​What does that mean? For those we serve, that money helps a student continue to learn through online education, provides food for an unemployed family, or gives a case manager the time to provide needed supportive guidance to a head of household seeking to find employment in a city of closed businesses and little work. Your donation lifts Catholic Charities in its mission of being a beacon of hope and dignity to the least among us.

Catholic Charities has always counted on the Matthew 25 Giving Society to give crucial, sustainable support. This year, there will be a greater need for our services and the ability to make up for decreased revenues. If you have an existing pledge, would you consider making a full payment before October 31st, sending in a supplemental gift, or increasing your normal contribution? If you are new to Matthew 25 or have not contributed in a while, please consider initiating a pledge. As a reminder, many donations carry a tax benefit due to the CARES Act. I encourage you to check with your tax advisor regarding potential benefits.

Our event will be held via Zoom conferencing software, accessible via email or smart phone.
New to Zoom? Kiley Yuthas in our Development Office at yuthask@ccasfnm.org or (505) 724-4690 can help.
​Elisabeth Loya, Donor Relations Manager, is available at loyae@ccasfnm.org or (505) 724-4637 to answer questions about the event.
Fr. Fred Kammer
Guest speaker at our Virtual Event - Tuesday, September 22 from 4pm-5pm via Zoom
Fred has worked in a number of programs for the underprivileged, both as a lay volunteer, an attorney, an advocate, and an administrator.  From 1990 to 1992, he was the Policy Advisor for Health and Welfare Issues, Department of Social Development and World Peace, U.S. Catholic Conference.  Prior to that, from 1984 to 1989, he was Executive Director of Catholic Community Services of Baton Rouge.  Earlier, from 1977 to 1983, he was Director of the Senior Citizens Law Project of the Atlanta Legal Aid Society.

Fred is also a retreat director and author.  His first book, Doing Faithjustice: An Introduction to Catholic Social Thought, was published by Paulist Press in May, 1991 (second printing, 1992; third printing, 2005).  His second book, Salted with Fire: Spirituality for the Faithjustice Journey, was published in January, 1995, again by Paulist Press, and republished in 2008 by Wipf and Stock Publishers.  His third book, Faith. Works. Wonders.—An Insider’s Guide to Catholic Charities, was published in September, 2009 by Wipf and Stock Publishers. This New Orleans native received his J.D. from Yale University and M. Div. from Loyola University in Chicago.  ​

Hands of the Holy Spirit Award
This award honors faithful partners who go beyond what was expected, doing so without seeking acknowledgement of their activities. It reflects the belief held in the eyes of the Church that Charity is accomplished when we allow the Holy Spirit to use our hands to provide relief, to console, to teach, to assist, to counsel and to welcome.
Patricia Robinson
Southwest Franciscans The Franciscan Friars of Our Lady of Guadalupe Provence have long been our partners in addressing some of the most difficult challenges in Albuquerque, Santa Fe, and other New Mexico Communities. They are tireless volunteers, dedicating thousands of collective hours to supporting the work of Catholic Charities in the community. During our Companions on the Journey effort to support recent arrivals in New Mexico, friars were there to counsel parents concerned for their families' future. When our Adult Education program obtained over 200 laptops for remote learning, a friar spent hours helping get them all set up and ready for student use. Friars have helped us assemble furniture, move donations, counsel those in crisis, and performed endless other acts of service in the community. Their unflagging dedication to supporting all aspects of our work make Catholic Charities proud to honor Southwest Franciscans as Hands of the Holy Spirit Award recipients.
Simon of Cyrene Award
This award recognizes individuals who have helped Catholic Charities by carrying some of the burdens faced in providing assistance to those in need. It represents the assistance Simon of Cyrene provided to Jesus by carrying the cross after He fell on the road to His crucifixion. One recipient is chosen by each of our Centers of Excellence and Administration.
​
Nominated by the Center for Self-Sufficiency and Housing Assistance
Connie Chavez
Connie empowered and encouraged all of the Barrett staff, from the kitchen manager to shelter support to case managers and office administration, to take an active role in advocating on behalf of clients.
The Barrett Foundation has many housing programs one of which is their Permanent Supportive Housing program, Socorro. Catholic Charities collaborates with Barrett to be able to provide this program for many of the most vulnerable among the homeless population.
It has been my distinct pleasure to know Connie and her team at Barrett in this work and in her distinctive presence within the community. Connie will always be a voice for the poorest and most vulnerable and she is, like Simon of Cyrene, a carrier of the cross and a mutual friend of the burdened of our community.
She continues to be a leader within the Albuquerque community at her new position at Carrie Tingley Hospital Foundation.
For these reasons, the Center for Self-Sufficiency and Housing Assistance, has nominated Connie Chavez for the Simon of Cyrene Award. ​
Nominated by the Center for Immigration and Citizenship Legal Assistance - CICLA
​ John Cunningham
Nominated by the Center for Educational Opportunity and Career Pathways
​Charles Ashley III
Nonimated by the Center for Community Involvement
​Bob Wood
He understands the importance of our ongoing training and provides the information required for our updates and reporting.
The COVID-19 Pandemic created a heavy load in our Senior Transportation service. Within a week, drivers quickly became scarce. Of course, this was understandable but regrettable for our seniors needing transport to important medical appointments. Instead of going on hiatus during this challenging time, Bob stepped up and increased his service availability, sometimes driving twice a day! One last positive note - when Bob is not driving a senior, you can find him on the road delivering needed food boxes to people who are not able to leave their homes.
We are extremely grateful for his life giving commitment in serving others. Thank you, Bob for being our Simon of Cyrene.  ​
​
Nonimated by the Center for Refugee Support
APS Refugee Point of Contact Team (Brandon Baca, Edmund Mwamba,  Chantal Muhumure, Farida Ibrahim, Mohammad Ismail, Mbarak Hussein, Dina Raheem and Parwin Hussaini)
Their advice and counsel has led to the success of our programs and our participants.  The benefit to refugee youth and their parents has been significant and long-lasting – these students now have a voice and connection to their teachers and schools in a way that was impossible before the APS refugee team began their work.  We look forward to ongoing and consistent engagement with this team, and truly feel that they have carried the burden so that our refugee youth could have more opportunities to thrive.
Nonimated by the Administration
​Sandy Stewart
Since the Executive Assistant was filled permanently in February 2020, Sandy has transitioned back to volunteering for the organization. Pre-COVID, she had returned to work in the HR department helping Rose. When the office closed, Sandy continued to meet with the Admin team at least once a week to help plan special events such as the St. Nicholas Ball. She is our go-to for any project, big or small, and has even agreed to Chair the St. Nicholas Virtual Gala this year! Through it all, she has been such an incredible professional asset and the best friend and team member we could ask for. We are deeply grateful that she chose to come work with us, and for her dedication to supporting Catholic Charities. Thank you Sandy!
Nominated by Children's Learning Center
Dianne Wagemann for CHI St. Joseph's Children
This year's Matthew 25 Appreciation Event is on Tuesday, September 22nd.
​Please call Elisabeth Loya at 505-724-4637 for more information
Donate Now